Rightfully, last week’s jobs numbers were celebrated.  It was, in fact, the best four months of job gains since data was tracked in 1939, adding over 11 million jobs since the May 2020 report.  These results brought the “headline” unemployment rate down to 7.9%.  No doubt, these figures are titled as progress but, as is often the case with employment reports, the “devil is in the details.”

In the chart below, the three most-often-tracked employment figures are tracked back to 1994.  Not surprisingly, this year’s data has taken on an unprecedented trend shape.  The swift job losses in the Spring have been followed by significant employment gains.  The four-month best period referenced above has much to do with digging out of such a large trough.  The next six to twelve months will be fascinating and critical to assess what lasting damage the pandemic has left in its wake.  The U-6, often described as the most comprehensive unemployment figure as it includes those who are no longer looking for work or those part-time for economic reasons, now sits at 12.8%.  This number has shrunk dramatically over four months but still sits near a figure not seen since 2014. 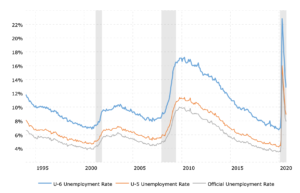 There are countless data points to consider when assessing the economic devastation left by the COVID-19 pandemic.  In this recession, we believe the unemployment figure is critical to monitor because the strength and optimism of the consumer is directly tied to the size of the consumer base.  Last week was littered with layoffs from multiple industries and their largest corporations and there is considerable and justifiable anxiety that a “second wave” and/or continued economic partial openings/restrictions will lead to more of the same.

If we look back on the economic recovery following the Financial Crisis, we see how slow-building corporate confidence helped employment gains from 2010 through 2020.  Although corporate America has been a huge contributor to job losses this year, this year’s swoon has been far more punishing to small business, particularly those in leisure and hospitality.  Over the next couple years, it will be critical for small businesses to survive and regain strength as they account for over 47% of this country’s jobs.

Bureau of Labor and Statistics.  BLS.gov