Social Security is the biggest source of retirement income in our country.  In 2015, 34% of Americans age 65+ received at least 90% of their income from Social Security¹.  Increased life expectancies have stressed the program and in 2015, two strategies for couples to maximize their benefits began a phase-out process.  Today we discuss those strategies, who may still be able to benefit, and their implication for Social Security benefits in the future.

The file and suspend strategy was legislated out of existence as part of the Bipartisan Budget Act of 2015.  The bill was signed in November 2015 and gave retirees until the next April to use the strategy and be grandfathered under the old rules.  The strategy worked well when a primary breadwinner wanted to delay and maximize their benefit.  They could file for their own Social Security benefit, then immediately suspend payments.  By filing, they allowed their spouse to apply for spousal benefits, which are 50% of the filer’s benefit, while allowing their own benefit to accumulate the 8%-per-year delayed retirement credit.  The chart below shows that the spouse gets their maximum spousal benefit at full retirement age, while the breadwinner’s benefit could be delayed to become 32% larger at age 70.

The file and suspend strategy is no longer available for those who have not already utilized it.

The restricted application strategy was also limited by the 2015 budget bill.  However, it is still available at full retirement age, age 66, for those born before 1954.  Since that age group turns 66 in 2019, this is the last year that restricted applications will be prevalent.  If you were born in 1953, you should examine this strategy to see if it could be beneficial.

The strategy works by “restricting” your Social Security application to spousal benefits.  Going forward, any application will be deemed to be for all available benefits, but if applicable you can apply for spousal benefits and leave your own earnings record to grow with delayed retirement credits.  Restricted applications tend to benefit couples in which both spouses have an earnings record and are similar age, ideally with the higher earner being a few years older.  Similar age is important because a spouse can only apply for spousal benefits after their spouse has already applied for benefits (divorced spouses of 10+ yr marriages are exempt).  Both spouses having worked is important because the strategy only helps if the partner applying for spousal benefits could conceivably receive more on their own record in the future.  This is much easier to understand using numbers.

In this example, the lower earner can start their spousal benefit of $1,000 at age 66 and then switch over to their own benefit of $1,188 at age 70 with the benefit of maximized delayed retirement credits.

The phased elimination of these two strategies was an attempt to improve the long-term solvency of Social Security.  According to the 2019 Trustees Report, benefits are currently funded through 2035.  Annually the trustees estimate the effect various reforms would have on solvency.  The most often-discussed reform of increasing retirement age does not make a large difference in long-term solvency; delaying retirement ages by two years only increases solvency by about two years.  The one published proposal that substantially improves long-term solvency is to increase the amount paid in by workers. 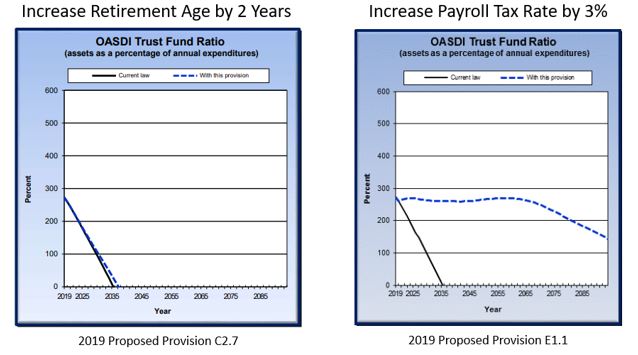 Ultimately, these changes are the responsibility of Congress, which created Social Security in the first place.  Any reform is therefore a political process, which have proven unpredictable in the past.  We continue to believe that our clients should do their best to create robust financial plans where Social Security is one piece among a variety of retirement income sources.  We are always ready to discuss how Social Security fits into your plan and the best way to strategize around the benefits available to you.