Taxes have been part of our country’s history from the very beginning – No Taxation Without Representation!  Some have said that the only two constants in life are death and taxes.  Today, the tax code has become so complex that you could spend as much time as you wanted to be buried in resources and still have more to learn.  When most people think of taxes, they’re probably thinking of the individual income tax.

In 1862, President Lincoln signed a bill into law that instituted our nation’s first income tax.  Incomes between $600 and $10,000 were taxed at 3%, while incomes over $10,000 were taxed at 5%.  Ten years later the income tax was repealed.  For the next 40+ years, the government collected 90% of its revenue from taxes on liquor, beer, wine, and tobacco.

In 1913, the 16th Amendment gave Congress “the power to lay and collect taxes on incomes, from whatever source derived.”  The first-ever Form 1040 was created, and Congress adopted a tax of 1% on net personal income over $3,000 and 6% on incomes over $500,000.  Five years later in 1918, Congress instituted a progressive income-tax rate structure like what we still have today.  Our existing tax payment system was forever shaped by the Current Tax Payment Act of 1943.  This Act required employers to withhold taxes from employees’ wages and pay them in to the government on a quarterly basis.

Taxpayers got a win in 1944 when the Individual Income Tax Act created the standard deductions on Form 1040.  Ten years later in 1954, the deadline for filing individual tax returns was changed from March 15 to April 15.

More recently, in 2017 President Trump signed the Tax Cuts and Jobs Act into law.  This was the most significant piece of tax legislation since 1986.  Among the changes were reforms to the alternative minimum tax, nearly doubling the standard deduction, and lower marginal rates across the tax brackets.

Throughout our history, individual income tax rates have been all over the board.  Between the mid-1920s to early 1930s, the rates were lower than almost any other time in our history with the lowest marginal rate of 1.5% and a top rate of 25%.  Perhaps the all-time high was in 1944-45 when the lowest marginal rate was 23% and the top rate was 94%. 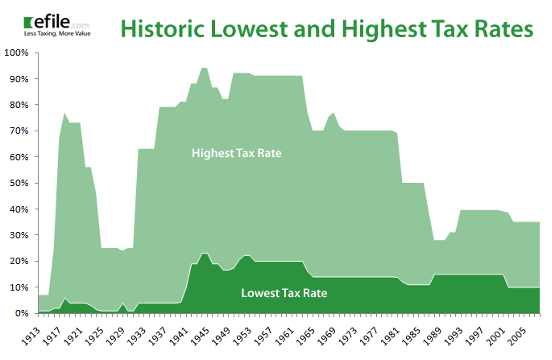 At the end of the day, whether you agree with them or not, taxes are here to stay.  Today, taxes are both lower and higher than they have been in our past, and you can be certain that trend will continue in the future.  Regardless of what the tax rates are at any given point in time, our job as advisors is to help our clients understand their tax picture as a whole and coordinate with their CPAs to create a plan that follows the tax code as efficiently as possible.

Anyone may so arrange his affairs that his taxes shall be as low as possible; he is not bound to choose that pattern which will best pay the Treasury; there is not even a patriotic duty to increase one’s taxes.