Last week the Federal Reserve raised rates by 0.75% or 75 basis points (bps). This is the largest increase since 1994.  Unless your memories of Alan Greenspan’s Federal Reserve are as vivid as your memories of a white Ford Bronco, this aggressive action feels unprecedented.  For the first time since the Great Recession, markets are taking the Fed’s interest rate projections seriously.  Let’s back that claim up with data as we explore the interrelationship between the Fed, markets, and investors.

What is the Fed thinking?

Pundits like to ascribe various motives to Fed actions, but everything they do comes back to their dual mandate: maximum employment and price stability.  Most of the time these two goals are complementary.  When unemployment is high, it tends to make sense to take an accommodative stance.  Lowering rates and adding liquidity stimulate business activity, which puts Americans to work.  However, easy money can also produce inflation and put these two goals at odds.  With inflation at a relative high, the Fed must tighten to achieve price stability, which may throw cold water on the economy and hurt employment.

While the Fed has several tools available, the tools are imperfect.  The overnight Fed Funds rate is a relatively direct lever over interest rates in the economy, but there is no button on the dashboard at the Fed to stop inflation.

For the first time since the 1970s, we’re at risk of experiencing a wage-price spiral.  Inflation raises prices, workers demand higher wages, employers raise prices to cover those increased wages, and the cycle repeats.  This represents the worst-case scenario for the Fed in today’s environment and avoiding it with aggressive action proved to be their highest priority at the FOMC meeting last week.

What are markets thinking?

Just over a month ago, Fed Chair Jay Powell said, “A 75 basis point increase is not something that the committee is actively considering.”  For an organization that does not have a reputation for swift action, a six-week reversal represents a substantial surprise for markets.  It seems that surprise has broken the relationship between what the Fed says and what markets hear.  We measure this by reviewing the Fed dot plot, which represents each Federal Open Market Committee (FOMC) member’s projections of future rates, in comparison to the betting markets.  Our proxy for the betting markets are Fed Funds futures.  The CME Group publishes forward rate probabilities derived from futures prices, which we weigh as a market-implied Fed Funds rate*. 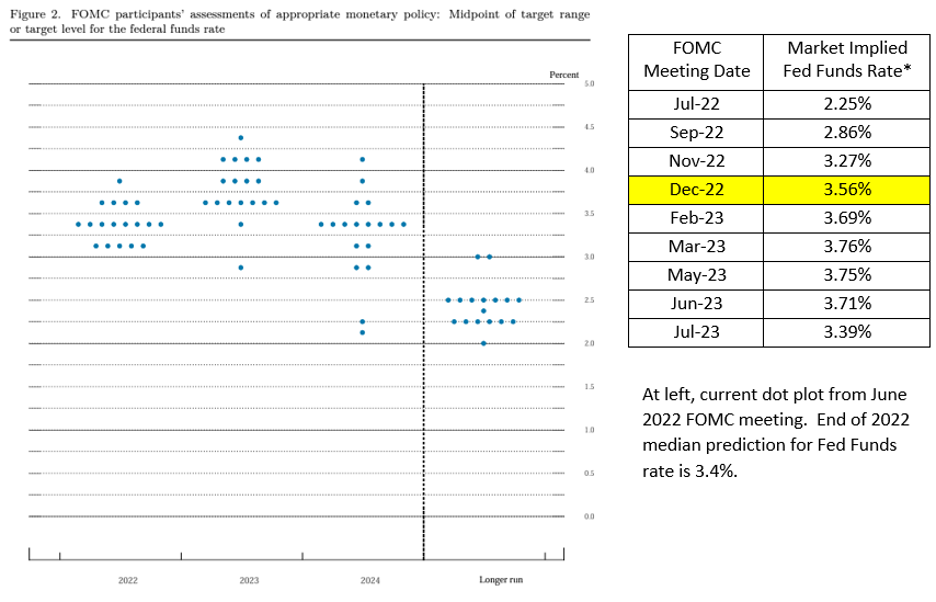 Ever since the Fed took its target rate to zero during the Great Recession, the market has not had a great deal of respect for the Fed dot plot.  At each meeting, FOMC members would predict a Fed Funds rate of 3%+ two years down the road.  Markets would discount that probability and six months later, the dot plot would look the same.

After the 75 bps increase last week, for the first time in my career the market is forecasting greater rate increases than the Fed itself predicts.  The median FOMC prediction for the end of this year is 3.4%, but futures pricing implies we will close 2022 at 3.56%.  After years of the Fed somewhat resembling the boy who cried wolf in terms of hawkishness, market participants finally seem to respect the Fed’s willingness to act.

What does it mean for investors?

As investors, we are all rooting for a Goldilocks economy- not too hot, not too cold.  A good description of this goal today is a soft landing.  We hope that Fed action helps tamp down inflation and slow the business cycle in a way that does not overdo it and results in a severe recession and high unemployment.

To achieve the elusive soft landing, the Fed will need to have great credibility in the eyes of the public.  This is because inflation has inputs both mathematical and psychological.  As the economy has restarted, we’ve all seen sectors experience Econ 101 inflation.  Demand outstrips supply and prices reach a new and higher equilibrium.  But inflation also compounds upon itself; the expectation of inflation begets further inflation.  If firms believe prices will rise and increase their input costs, they will respond by raising their prices and contributing to the cycle.

At a time when inflation is starting to resemble a flywheel, the credibility of the Fed becomes critical.  If firms and investors believe the Fed will take strong action to counteract inflation, price discovery can rely more on today’s supply and demand than future expectations.  Oddly, reversing a recent statement may have produced more credibility for the Fed that will serve us well over the next 18 months.

*Market Implied Fed Funds Rate is my internal estimate computed as the weighted average of different target rate probabilities for each Fed meeting.  Those probabilities are published by the CME Group as their FedWatch tool, which estimates the probability of a rate hike based on price fluctuations in Fed Funds Futures. https://www.cmegroup.com/education/demos-and-tutorials/fed-funds-futures-probability-tree-calculator.html