We’ve written a previous breakdown on the Social Security timing decision.  Briefly, between ages 62-70, if you delay taking income, your monthly benefit grows.  We discussed that delaying increased payments can be a winning strategy and that it is easy to calculate a break-even age when making this decision.  However, the same math that says one person is often well-served to delay returns a different opinion for couples of differing incomes.  In fact, it often suggests that one spouse should take benefits as early as possible.

There are two reasons for this dichotomy.  The first is the existence of Social Security survivors benefits.  If a high-earning spouse passes away, the surviving spouse begins to receive their monthly benefit*, including any delayed retirement credits.  This means that, for the higher-earning spouse, the decision to delay Social Security for a larger monthly benefit is compounded.  Their personal benefit increases, and their spouse’s survivor benefit increases.  The couple will benefit as long as either spouse lives to the break-even age.

This brings to mind the second reason for the dichotomy, which is the difference between single and joint life expectancy.  The probability of at least one spouse from a couple born in 1960 living to age 85 is 68%, but the probability of both age 85 is only 18%.  Interestingly, this spread in probability peaks in the early 80’s when many Social Security calculations break even.  The same math that suggests the high earner should delay for a larger payment, thanks to the fact that at least one spouse will live long enough, penalizes the lower earner.  This is because the only way the couple wins by delaying the lower-earning spouse’s benefits is if they both outlive the break-even period.  If the high-earning spouse passes away before this time, the low-earner will receive their higher survivor benefits, having needlessly postponed their own payments. 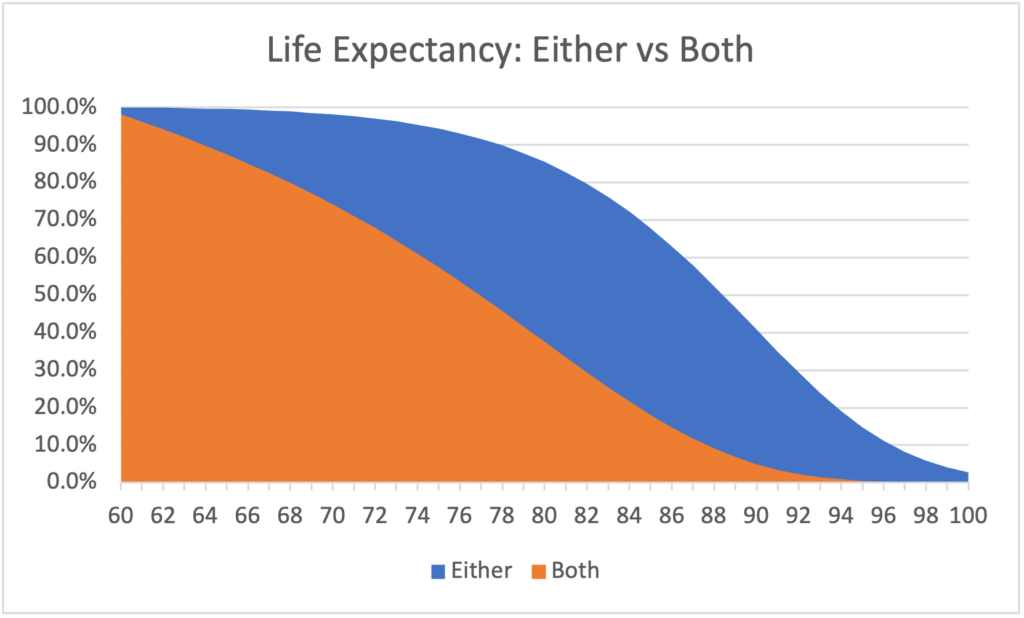 In our experience, many retired couples have one spouse who was the primary breadwinner.  For those couples, it is generally optimal to delay the high-earner’s benefits and take the lower-earner’s benefits early or at full retirement age.  Thus, the idea that it’s good to delay, is obviously not a blanket statement.  As with any irrevocable decision, it pays to run the numbers for each couple and make the decision with individualized data, accompanied by an understanding of the rest of household finances.

* Survivor must be at least 60 years old to receive survivors benefits.